The Remarkable Success Of A Little Story With A Big Heart…

UlstermanBooks.com > Entertainment > The Remarkable Success Of A Little Story With A Big Heart…

This month my novel, The Irish Cowboy became the #1 reviewed book in my entire catalogue, surpassing the first in the San Juan Islands Mystery series, the award-winning, The Writer.

What makes this especially notable is that The Writer enjoys the direct benefit of Amazon’s powerful promotion machine, being that it was published via their Kindle Press imprint while The Irish Cowboy‘s success is due almost entirely to YOU, the readers, and your generous word-of-mouth praise that has resulted in other readers from all over the world enjoying it as well.

To say I am both grateful and humbled by your support of the story doesn’t do justice to how deeply my appreciation runs. You have helped to propel the novel to being selected by USA Today as a ‘Happily Ever After’ editor’s pick as well as garnering the attention of Kevin Costner co-star Greg Patmore who was quite eager to narrate the audio version which has since become a fan favorite as well. (Some weeks more audio versions  of The Irish Cowboy are sold than e-book and paperbacks!) Greg felt the story would make a great film. 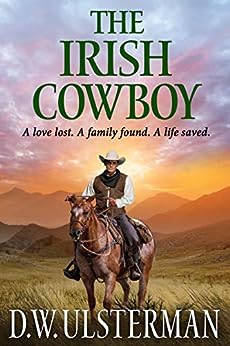 As of right now there are nearly 600 reviews and counting of The Irish Cowboy, the vast majority of them being quite positive. Some of you have messaged me personally to thank me for the story. It seems the lost-love tale of Hap and Shirley that then leads to an unlikely family reunion in the face of an attempted land seizure by a corrupt government official has struck a chord with a great many of you.

From romance novel fans to lovers of Montana’s open skies and wild horses, it seems not a week goes by now that someone doesn’t reach out to tell me how much the story meant to them. For a writer it really doesn’t get any better than that.

Keep those comments and reviews coming!