Stuart Island is a bit of an unknown gem among the more popular and visited San Juan Islands. It’s tucked away on the northwest border where the Salish Sea separates the United States and Canada and its lighthouse has looked out over those waters near the historic Turn Point cliffs since 1893.

The path this video takes you on is very similar to the one also taken by Adele, Roland, Lucas, Bloodbone, and others during the climactic final scenes of the soon-to-be-released TURN POINT MASSACRE which is book #6 of the ongoing San Juan Islands Mystery series.

It’s a place as isolated as it is beautiful and mysterious.

Enjoy the video and a hat-tip to MV/Jolly Mon. I was fortunate to meet him personally last summer while walking the docks of Cap Sante Marina (a place also featured in Turn Point Massacre.)  He’s a kind and charming gent whose YouTube channel does a wonderful job showing off what is undeniably one of the most fantastic boating destinations in all the world.

Pre-order the e-book version of the Turn Point Massacre HERE.

Purchase the paperback of the Turn Point Massacre HERE. 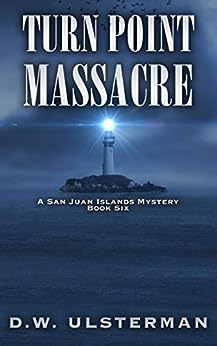 A Quick Look At The “Pig War” Of The San Juan Islands And Its Link To The SJI Mystery Series…
The Roche Harbor Mausoleum: A Father’s Devotion Or A Symbol Of His Bitter Resentment? (VIDEO)