With the second installment of the San Juan Islands Mystery Series, DARK WATERS out of the proverbial gate and preparing for the publisher’s initial round of promotions, I decided to take a moment to respond to some questions/feedback I’ve already received on the series. I had meant to do so earlier, but as John Lennon once said, life is what happens while you’re busy making other plans… 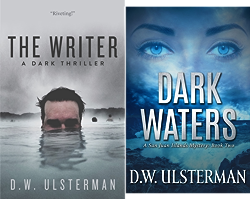 WHAT IS THE GENRE FOR THIS SERIES?

Mystery, of course, but more specifically the books qualify as “cozy” mysteries, and/or “amateur sleuth” mysteries. The term “cozy” simply refers to a type of mystery that is not overtly violent, sexual, or rife with profanity. And for those who’ve read at least the first in the series already, THE WRITER, you know that college-aged Adele Plank certainly qualifies as an amateur sleuth, albeit one who is quick to learn, and perhaps even quicker to act.

SOME REVIEWS INDICATED READERS DIDN’T LIKE THE PROLOGUE TO THE WRITER BECAUSE IT DEPICTED CRUELTY TO ANIMALS. WHY DID YOU INCLUDE THAT SCENE?

That scene was controversial with my editor as well, but as the author, I found it essential to the development and the reader’s understanding of the character of Decklan Stone and so pushed to have it remain as part of the story. What he experiences as a young boy, the sense of loss and guilt over what is done to the kittens, (and then what takes place later with the writer’s wife) very much plays into who Decklan may or may not be later when Adele comes to know him. While I am disappointed that some readers felt it necessary to mark the entirety of the story with their feeling uncomfortable over that initial scene, that is the nature of being a writer. Some readers “get it” while others do not. I would also note that those readers who did come to understand the prologue’s link to the rest of the story came to appreciate it very much.

IF YOU COULD ONLY USE ONE WORD TO DESCRIBE WHAT THE WRITER IS ABOUT, WHAT WOULD THAT ONE WORD BE?

Life, and all that single word entails.

SAME THING FOR DARK WATERS – A SINGLE WORD THAT DESCRIBES THE STORY.

That is a bit more difficult as DARK WATERS is itself a more complicated, multi-character story as Adele’s development is further fleshed out via a growing supporting cast, and the introduction of some romantic interest, and the potential for further complications that so often accompany such interest.

YOU’RE A MALE AUTHOR WHO HAS CREATED A POPULAR FEMALE LEAD IN THIS SERIES. HOW DID YOU MANAGE TO MAKE ADELE SO CONVINCING AS A YOUNG WOMAN?

I’ve been married to the same woman for nearly a quarter-century, so that helps – A LOT. Growing up, I also had a mother who was physically very tough, but sometimes emotionally quite vulnerable. I have always been, without thinking, very observant of others. Being a father of a teenage daughter has certainly aided in creating Adele’s character as well. It can be an exciting, yet uncertain time for someone on the verge of finally living life on their terms, and regardless of one’s gender, we can all remember that point in our own lives.

WILL THERE BE A THIRD BOOK IN THE SERIES?

Absolutely! I’ve already finished the outline, and hope to have the manuscript completed over the next few months. Adele has a lot more adventure in front of her, and island secrets to uncover.

ONE LAST THING. THE START TO DARK WATERS WAS PRETTY UNSETTLING. WOULD CRABS REALLY DISPOSE OF A HUMAN BODY THAT FAST?

You better believe it. Those critters are insatiable!

“So, You Want To Be A Writer?” – By Charles Bukowski (VIDEO)
RIP Leonard Cohen…