With book #6, Turn Point Massacre, scheduled for a full release on May 5th, author D.W. Ulsterman took time out to answer some of the many questions that have come in recently regarding his increasingly popular San Juan Islands Mystery series  and the ongoing mystery-solving exploits of journalist Adele Plank and her island friends Tilda, Roland, Lucas, and others.

QUESTION: Adele’s ongoing “Russian problem” was only hinted at in Roche Harbor Rogue. Will she finally have to deal with them again in Turn Point Massacre?

DW Ulsterman: That’s a direct question and I’ll happily give you an equally direct answer – YES. The Russians, at least some version of them, are definitely back to cause more trouble for Adele and those she cares about. It’s not necessarily the primary plot focus though. That focus is on learning a lot more about Adele—not just as an increasingly capable sleuth but more importantly those things that motivate her as a human being. Yes, she’s highly intelligent, brave, but also vulnerable and not without fault.

QUESTION: Are all the island places you talk about in the series real? After reading your books it’s obvious you have a lot of love for the islands. Why is that?

DW Ulsterman: The San Juan Islands have meant a great deal to me for a very long time. I believe in one of the dedications for the earlier books in the series I noted how they were always a place that allowed me to feel safe and welcome. That’s as true now as it was then. It’s hard to put into words the magic of the islands but I try my best throughout the series to do just that. The locations are very real – from the harbors of Roche, Deer, and Friday, to Rosario Resort, Matia Island, and in this latest book, Turn Point, they are actual places full of history and mystery. One reader even suggested I host a summer tour of the destinations outlined in the books. That would be fun! Perhaps some day…

QUESTION: Your series has a lot of diversity in it, from a strong young female lead to topics that are tastefully/thoughtfully included like race and sexuality. Was that intentional?

DW Ulsterman: Yes and no. I really don’t mean to be clever with that answer. Life well-lived is by its very nature a diverse experience and Adele is enjoying a very well-lived and diverse life on the islands that she loves so much. I didn’t set out to purposely create diversity so much as simply reflect it back naturally within each story. I try hard not to pummel the reader with politics or a particular agenda. Frankly, I am rather tired of writers who do. Politics are inherently divisive, so divisive these days that we are increasingly hungry for simple escapism-entertainment that doesn’t forcibly push groups of people into their respective corners. The San Juan Islands are about the freedom to be who you want to be and not what others would have you be and a place that manages to honor both rugged individualism as well as a sense of community. I very much want the series to communicate that spirit.

QUESTION: Your characters seem so real and for some reason I’m really drawn to Tilda Ashland. I love how you’ve developed the friendship between her and Adele. Are they based on people you know in real life?

DW Ulsterman: Thank you very much for the compliment. Tilda is a favorite of mine as well. She was a bit of a wreck in the first book The Writer but has since proven to be the kind of strong and loyal friend we all wish to have in our own lives. What has become increasingly undeniable as the series has progressed is how fierce and fearless Tilda Ashland truly is and I have really enjoyed watching her character arc progress. As for others in the books being based on people in my own life there is likely some borrowing here and there. I’ve said before how Adele was partly created from my wife’s personality as well as memories of my mother and experiences as a father to my daughter.

QUESTION: Boats are a big part of the series. Do you own one yourself?

DW Ulsterman: I am blessed to be married to a woman who enjoys being on the water as much as I do and over the years we have had a number of boats both great and small. Most recently we became the new owners of a large trawler named Liberty Belle. If you’re in the San Juan islands during the summer months keep an eye out for her, introduce yourself if you like, and I’ll be happy to sign a book for you.

QUESTION: Bloodbone has become a favorite character of mine but I still don’t really understand who or what he is. Can you help me?

DW Ulsterman: I intentionally made Karl Bloodbone an enigma shrouded in fable and rumor. His link to Adele was hinted at in Roche Harbor Rogue and that link is further fleshed out in Turn Point Massacre. His importance to the overall series and the other characters will continue to develop. He’s one of the mysteries Adele has yet to fully solve and I intend to keep it that way for a while longer.

QUESTION: Readers have compared your series favorably to Sue Grafton. Are you okay with that comparison?

DW Ulsterman: Sure, why wouldn’t I be? Sue Grafton created something very special with the Kinsey Millhone series and readers obviously responded enough that there were 25 highly successful installments  that only ended because, sadly, Grafton passed away a few years ago before she could complete the final one. And while Adele and Kinsey share a similar hunger to see a mystery through, there’s also enough differences to make each able to stand on their own merits as characters. As to my style of writing vs Grafton’s, again, there are some similarities but I’m not yet comfortable putting my work directly alongside hers. Sue Grafton was at this for much longer than I have been and her legacy is much-deserved and I imagine her books will continue to be read for some time. They’re pretty darn good.

QUESTION: A lot of your past reviews say each new book is the best of the series. Are they right? And if so will that trend continue with Turn Point Massacre?

DW Ulsterman: I hope they’re right! I do try to make each one better than the last. I was early on in my writing career when I completed the first in the series, The Writer. It’s a solid little mystery, it won a Kindle Scout award, was picked up by a publisher, etc., but overall, I do agree that the later books in the series are better efforts overall. Then again, some readers loved the spirituality of book #5, Roche Harbor Rogue, while other readers said they wanted more action. The good news is that Turn Point Massacre offers up plenty of both. In many ways I do think it’s the most complete novel in the series so far and has drawn me much further into the lives of all the primary characters. I really do care about them.

QUESTION: How many San Juan Islands mystery books do you plan to write?

DW Ulsterman: This is a series that still has a lot of growing up to do. I recently answered another question about similarities to Sue Grafton. She wrote 25 Kinsey Millhone books before passing away. Turn Point Massacre will be book #6. God willing, I don’t plan on stopping any time soon so long as the readers keep reading them.

QUESTION: Beyond the money what is your #1 reason for writing the San Juan Islands Mystery series?

DW Ulsterman: That’s actually a very good/interesting question. It really does come down to my love of the islands which I have spoken of before. It’s hard to explain it to those who have never been. One of the things I like most is hearing from readers who travelled to the islands after reading the series. One reader and her husband flew in from the other side of the country last summer. They read the books, loved them, and decided they had to see the islands for themselves. They were able to walk the docks of Roche Harbor, see Tilda’s hotel and Roland’s new home perched high above the hillside, Rosario Resort, Friday Harbor and its bookstores, etc. That’s a pretty cool feeling knowing your work played a part in someone else discovering how enchanting this little corner of the world really is.

TURN POINT MASSACRE and the entire SAN JUAN ISLANDS MYSTERY series are available now in e-book and paperback via Amazon.

(Just click the images to be taken to the order page.) 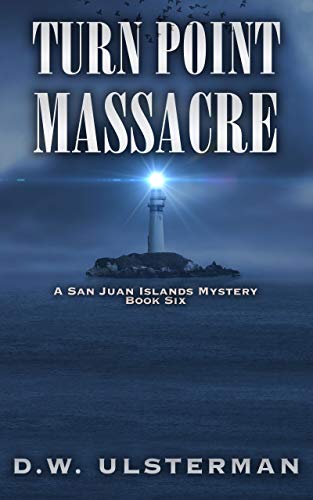 Summer 2020 Update From D.W. Ulsterman…
In Remembrance Of A Reader Named Mary…