D.W. Ulsterman: “We Must Be Able To Disagree Without Being Violently Disagreeable.”

UlstermanBooks.com > Entertainment > D.W. Ulsterman: “We Must Be Able To Disagree Without Being Violently Disagreeable.”

That was the wisdom of Martin Luther King Jr. following the assassination of Malcolm X in 1965. It was true then and is just as true today. American society has become far too fractured and the rhetoric dangerously inflammatory.

Steve Scalise, one of highest-ranking members of Congress was shot and very nearly killed this past week while practicing for a baseball fundraising event. The congressman’s recovery will be a long and difficult one. His name was part of the shooter’s long list of political targets. Three others were also shot. The shooter’s motive was clear. He was seeking to kill Republicans. James Hodgkinson’s multiple social media contributions indicated his political views – views which apparently included a call to end the life of President Trump and other Republicans.

(ABOVE: James Hodgkinson pictured in 2011)

This is what makes Mr. Hodgkinson’s example so troubling. From a distance he appears like so many other like-minded politically active Americans. He identified as a Democrat, or Socialist Democrat, (he was as supporter and volunteer of the Bernie Sanders presidential campaign) was a member of the Occupy Wall Street movement, spoke the very same class warfare language so common to the political discourse of this country’s far left, etc.

In other words, by the very standards of today’s political climate, James Hodgkinson seemed “normal.”

And therein we find a very serious problem and one the Mainstream Media has much to be blamed for. On the very same week that Mr. Hodgkinson shot at Republicans on a baseball field, a Shakespeare in the Park performance in New York was being applauded by critics and media pundits for its depiction of Donald Trump’s assassination.  And this was followed close on the heels of D-List entertainer Kathy Griffin’s shocking use of a decapitated Donald Trump as a means of making a political statement – a statement that clearly implied a desire to kill Trump. (Ms. Griffin also stated earlier that Donald Trump’s then 11-year-old son Barron should be given a “beat down.”) 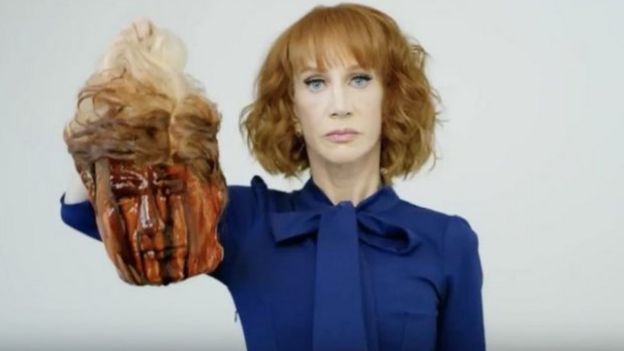 There is nothing normal or acceptable about the above examples. The United States has a wonderful tradition of sometimes very heated political discourse. That is a good thing. It’s not about right or left, Democrat or Republican, but what each of us feels is best for the future of this country. Violence, or threatened violence, should never be included in that back and forth. Supporters of Donald Trump should feel safe publicly disagreeing with supporters of Bernie Sanders or Hillary Clinton, or Barack Obama etc., without fearing violence – and vice versa. As I have stated many times before, there is certainly plenty for people to disagree with President Trump both politically and personally but NEVER should that disagreement include violence of any form.

I know it is a cliche to say we are ALL Americans – but cliche or not, I feel it to be true. Regardless who the president is and the party they are affiliated with, you support them or you don’t. We all get one vote. We all are allowed an opinion. Work to educate others if you feel the need. Participate. Coordinate. Volunteer. Be informed. These are all great and wonderful components to a free society.

Shooting the opposition or holding up a likeness of the president’s severed head is not an indication of a healthy society.

America continues to be sickened by the poison of dangerous division – a division the Mainstream Media has of late been far too eager to participate in.

Let us heed the advice and warning of Dr. King and work to disagree without being violently disagreeable.